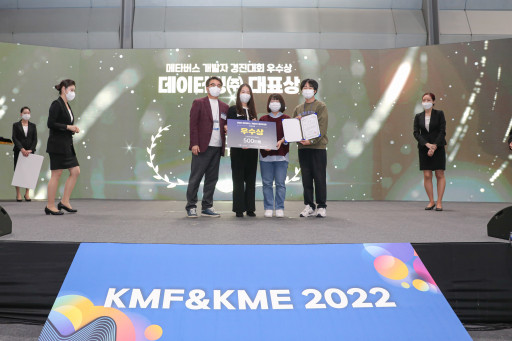 At COEX Seoul, on the 13th of last month, Data King Co., Ltd. (CEO Park Sun-Kyu) held a ceremony for students excellence in the designated task award for the '2022 Metaverse Developer Competition.'

Hosted by the Ministry of Science and ICT and organized by the Korea Radio Promotion Association and the Korea Metaverse Industry Association, the Metaverse Developer Competition was designed to expand the base of the domestic metaverse industry and find and foster those with talents.

The field of participation in the competition is divided into designated tasks that develop on specific topics using software (SW) authoring tools from domestic and foreign companies and free tasks that do not have restrictions on format and subject. Data King offers its platform 360 Hexa World Creation (3D Voxel S/w) engine to complete the task "Metaverse in your Imagination! Create the Future of Seoul in 100 Years."

A total of six different teams participated in the project, and the Future Planning Division team, which interpreted future Seoul 100 years after as morning, afternoon, and night and also created 20 landmarks with different conceptual sectors, won the Excellence Award. The Future Planning Division team consisted of three university students who had no previous experience in software development. They structured the metaverse future of Seoul with no coding skills to win and receive $5,000 USD.

The Future Planning Division team picturized many forms and shapes of Seoul's scenery using the concept of a fresh morning of Seoul harmonized with nature and tradition, a busy and grand afternoon of future Seoul's airborne city, and extravagant streets of Seoul in the night shining with neon lights.

The team said, "It was not easy to create the metaverse-based Seoul 100 years later in the future through this competition, but I feel great that I won the Excellence Award with my team members."