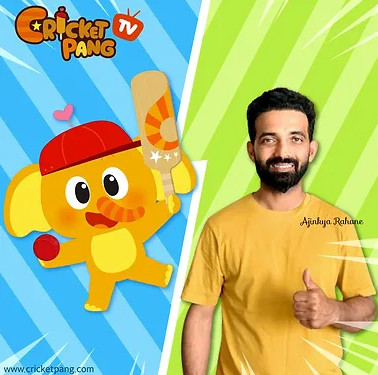 In 2017, a survey from the parents of children between the ages of 2 and 10 in the United States showed that in a week, children's screen-based play time averaged 18 hours and 6 minutes.

Kids Content is a new market that can distribute content around the world without a large amount of marketing costs, and it is expected that Kids Content will become a key industry leading the Korean Sensation in the future due to industrial and environmental requirements.

In the middle of this trend, You Need Character's 'Cricket Pang' is receiving high expectations for the future.

Cricket Pang is an animation produced under the theme of Indian national sports cricket. In India, cricket is a national sport similar to religion and its popularity and reputation are beyond imagination.

Ajinkar Rahane, a national cricket player with national recognition in India, has increased his popularity by working as a brand ambassador. The YouTube channel CricketPang TV has more than 340,000 subscribers and 60 million video views, meaning that You Need Character's goal of creating Pororo of India is approaching success.

Cricket Pang goes beyond simple cricket-themed cartoons, but contains educational content that can be helpful to children. It is a process of socialization such as cooperation and friendship, stimulating both fun and benefits.

Through Cricket Pang, You Need Characters have successfully entered the Indian market, which have been rare for Korean companies to enter. Showing the possibility, it is increasing the likelihood of business expansion in the overseas market sales channel through the country's sports, education, and culture.

Original Source: You Need Character's 'Cricket Pang' is a Korean Sensation That is Anticipated to Lead the Kids Content Market