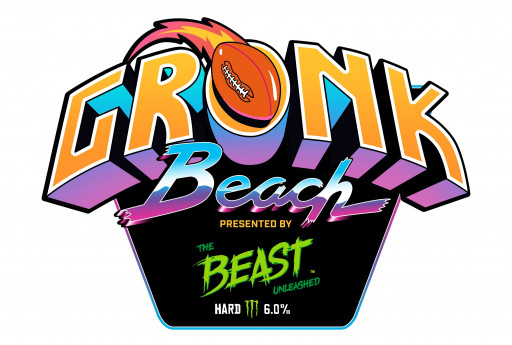 4X Super Bowl Champion Rob Gronkowski knows a thing or two about Big Game Weekend and this year, he's competing for the MVP of Fun at the return of his personally curated music festival Gronk Beach presented by The Beast Unleashed, the first-ever adult beverage from Monster Brewing. The former University of Arizona star will have a homecoming of sorts, celebrating the biggest weekend in sports with the ultimate beach party and music festival taking place at the legendary Talking Stick Resort, Scottsdale's hottest entertainment destination, on Saturday, Feb. 11, beginning at 12 p.m. Produced by Medium Rare, with headliners 21 Savage, Diplo, and Lil Jon, Gronk Beach will continue to raise the bar, bringing unparalleled Gronk family energy to Phoenix. Tickets and WYNN Nightlife VIP Tables will be available via presale on Thursday, Jan. 12, beginning at 10 a.m. MT at GRONKBEACH.com. Register for tickets now.

Grammy Award-winning rapper 21 Savage will head to the pool as co-headliner for the event. 21 Savage, alongside Drake, put out a Billboard #1 album in late 2022 and, since entering the scene in 2016, Savage has gone platinum — 16 times. Performing with 21 Savage at Gronk Beach is Grammy-winning superstar DJ DIPLO and hip-hop icon Lil John. Founder of global dancehall group Major Lazer, the critically acclaimed DJ has racked up dozens of industry award nominations and taken home three Grammy awards and three iHeart Radio Music Awards. Known for his part in creating the popular southern music and lifestyle movement of Crunk, Lil John is one of the most recognizable icons in music and pop culture. In addition, DJ Irie, Bijou, and Sommer Ray will round out the lineup.

With prices starting at $199, all tickets will include a six-hour open bar, complimentary bites, and the greatest views of the legendary headliners. All general admission tickets, VIP tickets, and WYNN Nightlife VIP Tables can be purchased online at GRONKBEACH.com beginning this Thursday. Adding to the excitement, Gronk Beach fans will have the first opportunity to sample The Beast Unleashed, an all-new adult beverage from our friends at Monster. As the presenting partner of this year's Gronk Beach, The Beast will unleash many unforgettable experiences, including an epic onstage cheers moment with Gronk himself.

With massive cultural impact, Gronk Beach has sold out thousands of tickets in minutes in both 2020 (Miami) and 2022 (Las Vegas) while attracting major talent, including The Chainsmokers, Kaskade, Rick Ross, and GORDO (Carnage), as well as celebrity attendees such as Bill Belichick, Lizzo, Julian Edelman, Nate Diaz, Travis Kelce, and so many more. As the most over-the-top poolside party of all time, Gronk Beach has garnered media from the Official Super Bowl Pregame Show on Fox, ESPN, CNN, Forbes, Sports Illustrated, CNBC, Barstool, The Late Show with James Corden, and more.

Gronk Beach presented by The Beast Unleashed 2023 will be no different — blitzing the competition once again. With dedicated poolside cabanas and bars featuring custom beverages from the likes of Monster Energy, Licor 43, and Teremana Tequila, sponsored experiences and activations, luau performers, and musical superstars, Gronk Beach will quickly become the "must attend" event of Big Game Weekend. For those looking to experience the biggest competition of the weekend outside of the game itself, guests will have to look no further than the Corona-sponsored celebrity volleyball game taking place on Saturday at Corona Beach. Live from the Corona pool, this volleyball game will test celebrities such as Gronk himself as they go head-to-head in an epic game of volleyball in the water.

"You may not see me playing in the big game this year, but there's one thing I'm not retiring from and that's having a great time. You'll get what you expect from me (and more) at Gronk Beach — great music, flowing drinks, lots of dancing, and basically the most exciting event of the weekend outside of the Big Game itself," said Gronk. "Thanks to the support of The Beast Unleashed, guests can expect great performances by some of my favorite artists in the world, including my pals Diplo, 21 Savage, Lil Jon and more."

Monster and all-new flavored malt beverage The Beast Unleashed are proud to present Gronk Beach. Featuring custom experiences, bars, giveaways, and activities, The Beast will keep the party going. Fans looking to be among the first to sample The Beast can head over to The Beast Bar experience or step out of the sun and recharge at the Monster Energy activation located near the pool. Beyond celebrating its VIP release, The Beast will take over the mainstage with a custom "cheers" moment led by the Gronk Beach event host, Gronk himself. Grab a can and raise your hands — here's to the greatest Gronk Beach yet.

"Everyone's favorite energy drink, Monster, is turning 21, so we figured why not celebrate by making our first adult beverage," says Renold Aparicio, VP of Monster Equity Brands. "To make The Beast Unleashed, we brewed up the smoothest-tasting alcohol, hit delete on the caffeine and sugar, then blended it with Monster's tried-and-true flavors. We can't wait to unleash The Beast for the first time at Gronk Beach before it is released this month in select states across the country."

Corona embodies "La Vida Más Fina" or "The Fine Life" as a modern expression of the brand's lifestyle. Corona is proud to partner with Gronk Beach to curate memorable consumer experiences across the event. Introducing an over-the-top Corona Beach activation featuring a pool, volleyball, photo moments, and more, Corona will ensure all fans ages 21 and older find la vida más fina in Phoenix. Amongst the sand and pool at Corona Beach, an epic celebrity volleyball game will take place. Featuring Gronk, Camille Kostek, and other celebrities to be announced, this epic game of volleyball will put our favorite celebrities head-to-head in the biggest game outside of the Big Game.

Talking Stick Resort is a premier destination for entertainment in the Valley. The AAA Four Diamond resort is located in the heart of Scottsdale where guests are submerged in the beauty of Sonoran Desert, yet minutes away from downtown. Dining, live entertainment, luxurious amenities and non-stop casino action are just a few features that make it a haven for guests.

Dwayne "The Rock" Johnson's ultra-premium, small-batch tequila Teremana® Tequila is headed to Scottsdale with the Mana Mobile truck. Continuing its mission to share gratitude via food and drink, the rolling envoy will be serving complimentary chips and guacamole, along with delicious tequila cocktails, and branded giveaways.

As a returning partner of Gronk Beach, Emsculpt Neo will enable fans to kick back and get sculpted at the Emsculpt Empower Lounge featuring Emsculpt Neo and Emface sessions. Breakthroughs don't happen by accident. They happen with persistence, dedication, hard work, and a desire to become a stronger and more confident you. Whether you wish to kickstart your fitness routine or want to obtain a competitive edge, Emsculpt Neo can help you tone up your face and body, build muscle, burn fat and deliver the rough equivalent of 12-16 weeks of HIIT training over four sessions. Sounds too good to be true, but it's not.

As an official partner of Gronk Beach, Licor 43 will incorporate custom cocktails and activations throughout the event including the buzzworthy Casa de Carajillo, which will feature over-the-top cocktail creations all using Licor 43. From Carajillos to "mini beers," Casa de Carajillo will be one of Gronk Beach's most visited poolside attractions.

Wrangler®, a global denim icon of 75 years, will be returning as the official denim sponsor of Gronk Beach. Throughout the event, Gronk and Camille Kostek will be sporting custom vests crafted from Wrangler jean jacket. Wrangler VIP guests will have the opportunity to customize their favorite denim (jackets, jeans, shorts — you name it) within the VIP area with Wrangler's signature laser printer. With Gronk Beach patches and a variety of customization options from the brand, fashion and football fans alike can find their perfect denim look. To line up your perfect Gronk Beach outfit, check out Wrangler.com.

Pit Viper is the world's leader in party-ready eyewear, apparel, and accessories. Polarized, safety-rated sunglasses designed with the optimal blend of style and performance, Pit Viper is the obvious favorite for fun-loving athletes like Gronk and the most fashionable NFL fans. As a brand that pairs best with celebrations, Pit Viper will return to the Beach to present the Pit Viper Champagne Shower — put on your Pit Vipers and get ready to make it rain at this year's Gronk Beach Party. Pit Viper: DEMAND RESPECT AND AUTHORITY.

For more information about Gronk Beach presented by The Beach Unleashed or to purchase tickets or WYNN Nightlife VIP Tables, visit www.GronkBeach.com. Follow on social at @GronkBeach on IG and Twitter.

Future Hall of Famer and 4X Super Bowl Champion Rob Gronkowski teamed up with Medium Rare to create Gronk Beach. The festival brings Gronk's eccentric personality to life, combining a high-end beach party with Rob's favorite musical artists, amazing food, drinks, interactive performers, and more. After announcing an all-star lineup featuring Diplo, Kaskade, Rick Ross, and Flo Rida, Gronk Beach 2020 sold out 3,000 tickets in just 10 minutes and was the most-talked-about daytime event ever at Big Game Weekend. With over four billion media impressions, Gronk Beach was covered by nearly every media outlet in the country including Fox's Super Bowl broadcast, cementing Gronk as one of the most-talked-about players of Super Bowl Weekend without even playing in the Big Game.

Lauded events, experiential, and management company Medium Rare works at the intersection of Sports & Entertainment, partnering with well-known athletes and brands to create iconic media properties, including Shaquille O'Neal's Fun House, Daymond John's Black Entrepreneurs Day, Guy Fieri's Restaurant Reboot, The Sports Illustrated Awards, Rob Gronkowski's Gronk Beach, and more. Creating and executing iconic IP and events that draw in millions of views and fans from around the world, Medium Rare also reaps industry accolades. Recognized with six Webby Awards, Medium Rare founders Joe Silberzweig and Adam Richman are Forbes 30 Under 30 alumni and have graced the Pollstar Next Gen and Variety New Leaders lists in 2020 and 2021, respectively. Industry innovators, the team has overseen successful launches and NFT campaigns for groups including The Golden State Warriors and the Preakness Stakes, shattering sales records in each category. The group's world-class production is balanced by its growing management division, overseeing careers, tours, and partnership deals for some of the most celebrated artists and athletes, including Gordo (formerly DJ Carnage), DJ Diesel aka Shaq and Rob Gronkowski. For more info, visit www.Medium-Rare.com.